Policemen and members of the Islamic Movement of Nigeria clashed again by the Federal Ministry of Foreign Affairs following reports that members of the IMN who belong to the Shiite sect were planning to burn down the ministry.

Meanwhile,  the fracas lasted, operatives of the Department of State Services redirected commuters and motorists to the Muhammadu Ribadu Road to link main Asokoro outside the presidential villa.

Properties of National Emergency Management Agency (NEMA) in Abuja were set ablaze when the Shiites protesters occupy the central area in protest.

The protest also led to a clash between the protesters and police officers who dispersed the crowd.

Several gunshots were also fired during the protest.

The protesters are demanding for the release of their leader El-Zakzaky, who has been in detention since 2015.

See photos of the protest below… 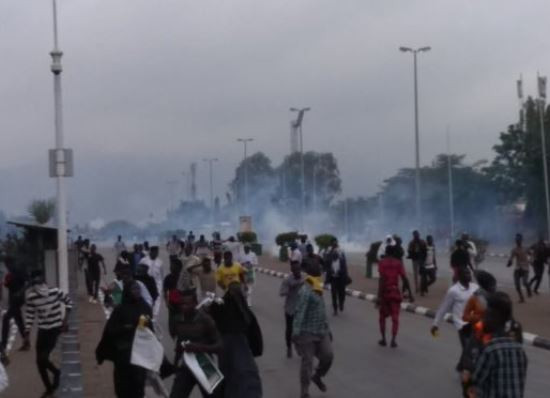